Written by Paul Soderberg in 2003 for Art Talk, a national newspaper

“It’s been a lovely adventure, but it’s almost impossible to believe it’s gone by so fast,” says Jennifer Hill of Carmel by the Sea. Her and Bill’s excellent adventure has been New Masters Gallery, which on April 1st will be 44 years old. 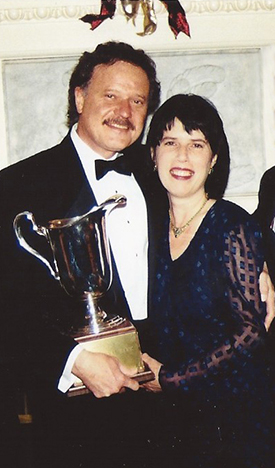 “We started out with a few painters who were new, so we called it the “New Masters Gallery,” Jennifer says. “Some of them are still with us after all this time, so we could call them our “Old Masters.” That would be particularly apt for one of those artists, says Bill: “When we opened in 1974, I used to tell people, ‘I have an artist who is 62.’ Now I tell people, ‘I have an artist who’s 92.’”

That artist is DeWitt Whistler Jayne, second cousin to James McNeill Whistler, thereby a blood relative to one of the most famous of all American paintings: Whistler’s Mother. Jayne was more than just an artist for the new gallery, Bill emphasizes: “At the beginning, he was my mentor-tremendously helpful. I used to go to his studio and he would lecture me about art-which really helped, because at the beginning I knew nothing about art.”

The 30-year-and-counting adventure started almost accidentally, when Bill and Jennifer first visited California and fell in love with Carmel. Jennifer: “When we called our parents back in Illinois and told them we were going to sell our house back there, move out here, and open an art gallery, they thought we’d taken leave of our senses.”

Bill: “Dad lent me $5000 to get started-after reminding me that it was a huge decision to move here and start in something I knew nothing about.”

That first New Masters Gallery was in a small space that was upstairs, in the back of a courtyard. Bill remembers: “There were times we’d go a few days without a single customer.” But that tiny space, with six local artists, was only the first of four locations, each one bigger, and today’s New Masters Gallery, in 4000 square feet, represents more than 40 artists from all over, Jennifer says proudly: “We now have artists from Europe, Asia, South America, and Australia-every place but Antarctica.”

“It’s been a lovely adventure, but it’s almost impossible to believe it’s gone by so fast.”

As the gallery grew in stature and importance, so did its artists. George Molnar, for example, is acknowledged today as one of the leading painters of the West. But when Bill and Jennifer Hill signed him up in 1974, he was working as a night manager at a local drugstore and painting at night. The Hill family also grew up with the gallery. Daughter Melissa, now the New Masters Gallery Administrative Assistant, spent her early days   in a crib in the back of that first tiny upstairs space. Jennifer: “When our son Michael was applying to colleges, he had to write an entrance essay. His essay was titled: ‘What it’s Like to Grow Up in an Art Gallery.’ And he got accepted.”

Jennifer herself could write an essay on what it’s like to try to be accepted in Carmel, whose residents have included Ansel Adams, Brad Pitt and Jennifer Aniston. Learning the art business was one thing, but learning the ways of that particular community was another, because this tiny art mecca, all of one square mile, has always been, municipally speaking, the mouse that roared. In 1929 it was proposed that a wall be built around the town and entry restricted. In 1953, Carmel threatened to secede from California when the state tried to insist on house numbers in every community. In his 1962 Travels With Charley, John Steinbeck wrote: “If Carmel’s founders should return, they could not afford to live there, but it wouldn’t go that far. They would be instantly picked up as suspicious characters and deported over the city line.” And Clint “Make My Day” Eastwood was elected mayor in 1986.

But from the days of Granville Redmond, Guy Rose, Franz Bischoff and other California Impressionists who loved the place, Carmel’s soul has been the arts. In 1910, it opened California’s first outdoor theater. The Bach Festival has been there since 1935. And the Carmel Arts Festival was organized by the Carmel Gallery Association in 1993, when Jennifer Hill was CGA President.”

It would be an understatement to say that Bill and Jennifer Hill not only learned, but excelled at, both life in Carmel and survival in the art business. Six years ago the Carmel Business Association voted New Masters Gallery “Best Business of the Year,” and, in a few years later, “Best Gallery in Carmel” – out of some 130 art galleries.

What’s been their secret? There are several factors in the Hills’ success and longevity in the too frequently transient world of art galleries. Bill: “If you know business but not art, you can stay in business long enough to learn art; but if you know art but not business, chances are you won’t be in business very long. When we started, I really didn’t really know anything about Art, but I wanted to learn. I also found that I am, actually very visual. I hadn’t known that.” Jennifer: “Absolutely- Bill has an excellent eye.”

Another success secret was their realization that the art business is not Big Business, Bill remembers: “After I got my MBA in Illinois, I was ready to go to work for Ford Motor Company. But for a gallery, you need other expertise—you need an entrepreneurial program tailored to a small business.”

But the Hills’ success ultimately has nothing to do with art or business, and everything to do with character. Character is expressed in countless ways, such as viewing paintings not as commodities but as creations. Thus Jennifer doesn’t refer to a painting as having been sold-she says “it’s gone to a new home.”  More tellingly, she and Bill see people not as customers, artists and staff, but as family and friends. “A wonderful fringe benefit of the business has been the people,” she says. “Our artists are like an extended family-as are our collectors. A couple of people have been buying from us since 1974.”

Bill: “We’re extremely fortunate in the people we work with. Paul Klingeman was in the gallery business for 18 years in Aspen before he joined us, and he’s just great. So is Debby Alexander, in charge of our marketing and promotions-she was the manager for the Carmel Business Association for a few years, and she’s brilliant. So is Forrest Forbes, our full time webmaster and electronic marketing expert.

But if you want to see the Hills’ character, look outside the gallery. Annually for the past 16 years, they have held holiday drives to benefit a number of local charities, and they host regular fundraising events for the Monterey Lyceum, to benefit children, and for the Kinship Center, which is dedicated to foster children and adoption placement. During the Hills’ annual Carmel Bay School benefit event, children aged 3 to 8 hang their own pictures in New Masters Gallery-with their own price tags. It’s so cute,” says Jennifer, “They’ll put things like ‘This painting is $8 million’ beside their drawings.”

This coming June 24, Bill and Jennifer Hill will host a very special show, not for Carmel but in Denver: “For the Love of Art,” to benefit the Craig Hospital-their way of saying thanks to the medical staff who helped Jennifer’s father, whose name is Art, recover from an accident.

New Masters Gallery is 30 years old and one of the best galleries in California partly because of good business sense, good art sense, and good location, but primarily because Bill and Jennifer Hill are, simply good people.