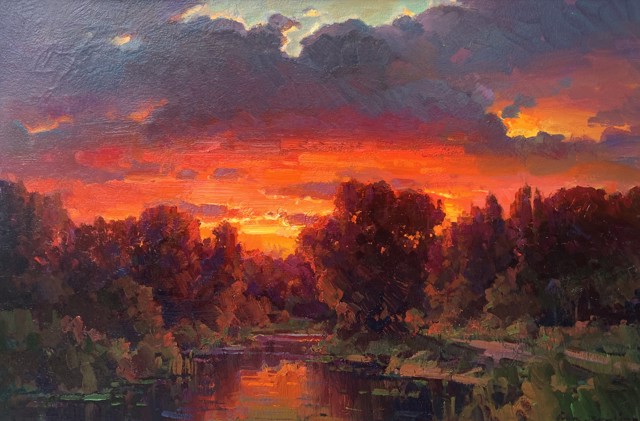 Ovanes Berberian was born in Alaverdy, Armenia, Russia in 1951. Mr. Berberian’s father was an important and noted artist in Russia, a member of the Armenian Artists’ Society, as well as a theatrical set designer and college art teacher. It was in this environemnt, studyng at his father’s art school, that Ovanes achieved the greater portion of his art education.

In the summer of 1977, after the death of the father, the Berberian family, three brothers with their mother, migrated to the United States and settled in California.

In 1981, Ovanes Berberian was awarded a scholarship to further his study in painting techniques with the late master painter and teacher, Sergei Bongart, in Rexburg, Idaho.

Berberian’s deep understanding of hues, values, and color relationships, blended with his own special technique of painting makes each one of his works a tour de force.

A painter’s painter, Ovanes Berberian is a colorist who endows every painting with the certainty of his convictions and dexterity. A plein air purist, he elects to paint on location, inspired by a more direct confrontation with his subject. He states unequivocally that in painting the most important thing is color harmony. Ovanes moves from landscape to still life with ease, his identifying characteristics being the lush surfaces and lively color of oils. Born in Russian Armenia, Ovanes received his academic training under the tutelage of his father, a noted artist and professor, during the height of the Armenian colorist movement, which left a strong impression on him. Berberian continued formal education from internationally acclaimed impressionist Sergei Bongart.

The paintings of Ovanes Berberian show a master magician at work, an artist whose perception of the landscape is so heightened that the act of translating the vision of two dimensional surfaces seems to flow in a single sweeping gesture.

Although Berberian has developed a high level of expertise and an intrinsic understanding of his medium, he surpasses mere technical prowess. Each painting, small or large, makes a statement about the artist’s relationship to the world around him. Berberian’s paintings have substance, attesting to the quality inherent in each subject, striking a chord deep within the view.

Berberian’s paintings are held in numerous private and public collections, including those of celebrities, professional athletes, corporations and heads of state.