New Mexico painter Eduardo Chacón explores the diversity of colors in still life paintings from his studio in Taos, New Mexico.  He focuses on “chiaroscuro”, the concept of light and shadow.  He was born and raised in Taos, New Mexico surrounded by an art community.  He comments:  “To take something two-dimensional and have the viewer perceive the piece as three dimensional is the challenge.  The viewer needs to travel through the painting, so to speak.  That is to say, a feeling is accomplished in making canvas or panel look which appears to be three dimensional.  Atmosphere is the key.  The painting has to have atmosphere within.  It is as if air flows around the objects.  I learn with every piece I do. I strive to build on what I’ve learned and hope to always paint the next piece better.”

Eduardo studied art at the University of New Mexico and Fechin Art Workshops.  He is a Member of the Oil Painters of America –OPA  and Juried member of the American Society of Traditional Artists -ASTA

Juried into the American Society of American Artists in Scottsdale, AZ

Juried into and exhibited at the Von Liebig Museum & Art Center in Naples, Florida for Art Encounter 2010       (entries from 50 states) 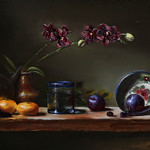 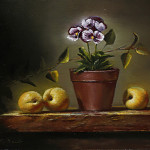 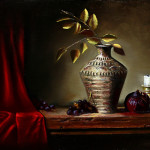 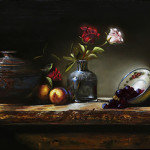 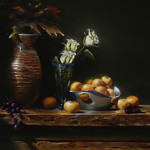