Artist Haixia Liu, Chinese painter, was born to a family of artists in 1962 in Hubei Province, China. Encouraged and instructed by his father and grandfather, he began to draw at very early age. He did paintings for local businesses at age 12.

Between 1981 and 1983 Liu chose to learn graphic design at the Hubei Industry Institute.

From 1983-1987, by dreaming to be an artist, he continued to seek his BFA at the Hubei Fine Art Academy, one of the best fine art schools in China.

From 1987-1999, after obtaining his BFA, he worked as a graphic designer at the China Packaging Import Export Corporation. At the same time he had been doing his realistic oil paintings. His art directly reflected the passion of natural beauty.

Liu attended many group and solo shows, and sold his paintings from province-wide to nationwide. In the last five years while he was in China, he started experimenting with abstract art on large canvases. 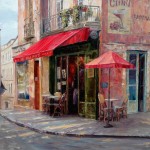