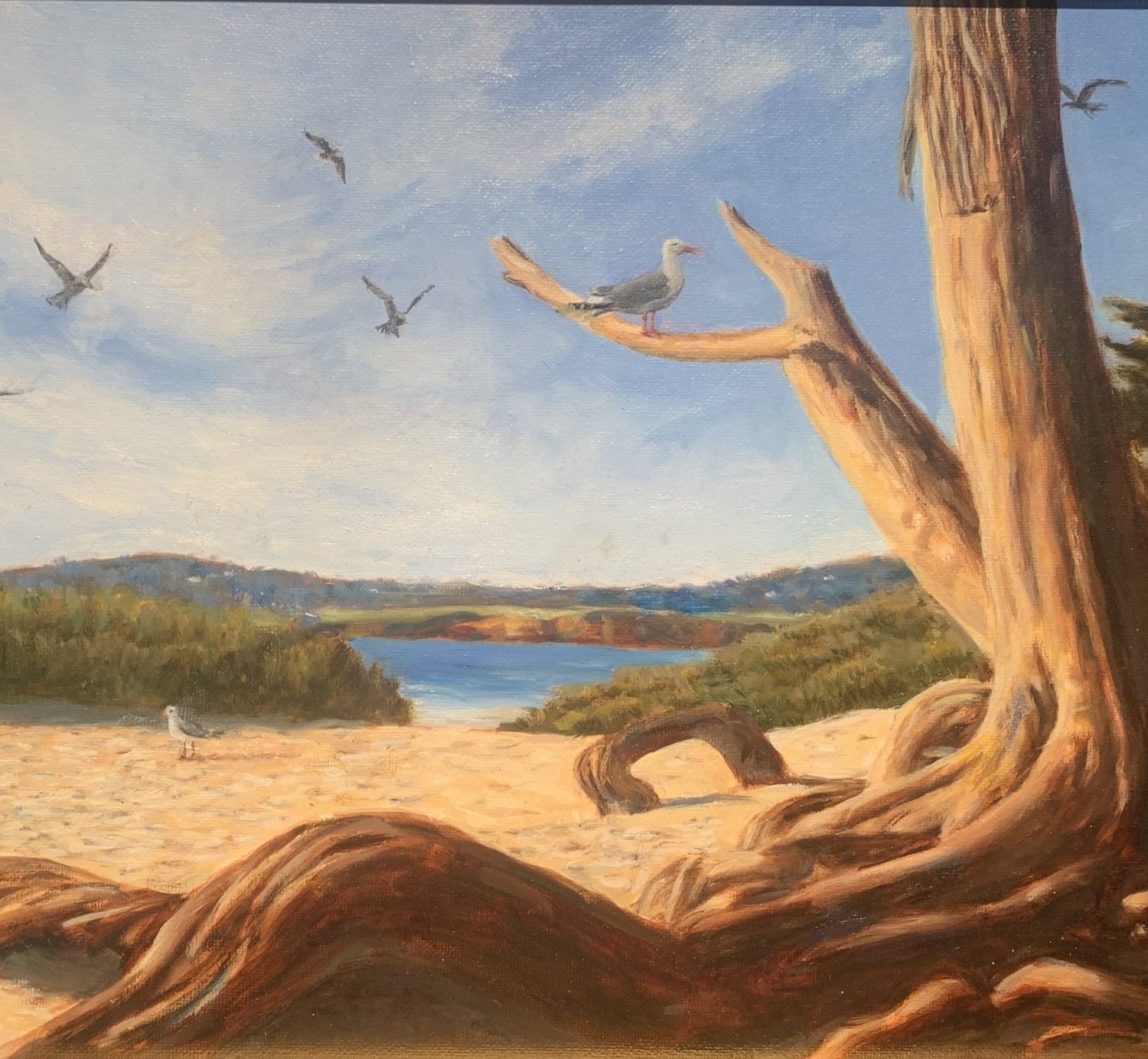 “Most parents teach their kids how to throw a curve ball, but mine were into the arts,” said Sines, an exhibitor at The Garden Gallery in Half Moon Bay whose primary work includes still-life, nudes and landscapes. “‘Draw the nice naked lady,’ they’d say,” he laughed. “I liked the drawing best. I liked painting too, but I think I got more paint all over the room than on the canvas.”

Sines credits his father with getting him started in art. “My father was one of those crazy artist types too, though I guess all artists are a little bit crazy. ‘Learn anatomy, son,’ he said. His legacy really lives on in me through his love of art.”

Sines is a California native and took art classes his whole life, including advertising art at the Academy of Advertising Art and contemporary art at San Francisco State University. He’s also exhibited across the state, from La Jolla to San Francisco, from the age of 21.

Sines paints a range of subjects, each demanding an intricate knowledge of technique. Lately he’s been combining still-life and landscapes, or still life and nudes, based on real items in his house. “These objects are usually things my wife and I have collected from antique shops. I have drawers full of them: wood carvings, stone relief pieces,” Sines said. “My paintings evolve when I find an object that strikes me. I just dig around and find something; and all the meaning-these pieces are just full of it.”

Once Sines finds an object he likes, he often takes pictures of it and other objects, such as fruit, at different angles and in different combinations. But he also paints from imagination too. “I may use certain real things as a basis for my work, but usually they are a starting point. From there my imagination takes over.”

Sines imagination allows him to take part of what he sees in a photograph, part of what is in front of him, and part pure creativity to achieve the best scene. “I fiddle with the composition and assemble as I go,” he said. “It’s like a video game: I reach another level of achievement and challenge myself to move to the next.”

Sines’ paintings show vividly how many different ways he has combined different art forms. In one painting, carefully rendered pieces of fruit-sliced and whole pears, thick bunches of grapes-have an almost glowing quality. Behind them, a black and white painting of a 1930s style nude woman sits at an angle. In the painting, “Shells, Cherries and Seascape,” flesh-colored conches and a few bright cherries sit on a mat in the foreground; behind them, the tiny figure of a person stands at the surf of an expansive ocean of low, frothy waves under an overcast sky.

And in the still-life, “Green Grapes and Chinese Figure,” Sines has used one of his own little treasures-a burgundy figure of the Buddha-as the focal point of a piece that also includes fat, shining green grapes. The color scheme, in which the rich reddish color of the figure is contrasted with the luminescent ripeness of the grapes, seems very deliberate. Indeed, this careful composition reveals just how much effort Sines puts into his pieces.

Sines said his own personality and experiences do come through in his work. “I can’t help but express myself in my paintings. Whether you want to or not, what you create is always original and reflects who you are and what you are feeling.” Sines said it’s not necessarily something he does intentionally, or something he is even aware of. “Looking back, it’s surprising how revealing some of my work is of what my life was like at the time,” he said. “It’s amazing how these unconscious things crept in.”

Sines’ method is very precise, involving small, soft brushes and what is called a “glazing method,” or painting many thin layers on at a time on to smooth panels. Because of the layers involved, Sines often works on many pieces at a time, allowing one layer to dry on one painting while he starts another.

Despite this required attention to detail, Sines often does many other things while he’s painting, including listening to music or watching television. “It’s really an entirely separate part of my head,” he explained.

Sines said he is his own most important critic when it comes to the success of his paintings. “When I get shown in a gallery or someone exhibits me in some show, I’ll be off to the side standing there. Someone will pass by my work, another raves about it, another thinks it’s awful,” he said. “I have to please myself.”