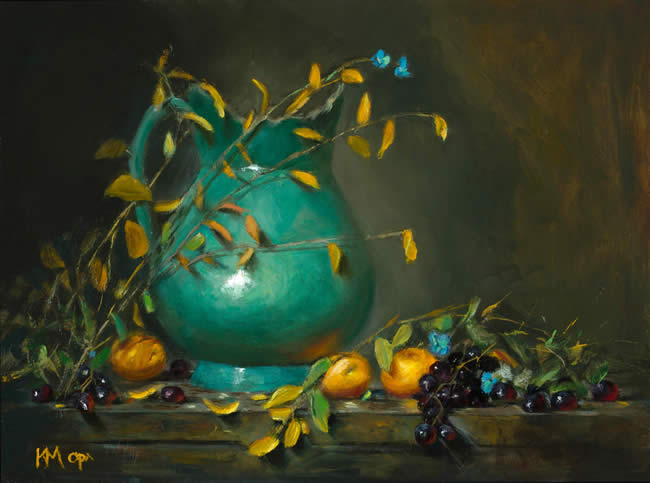 Born and raised in Santa Cruz, California, Kathryn Miller’s dream was to always be an artist. Her father did not encourage her to choose this profession; instead she spent 14 years traveling the world as a flight attendant. This gave her the opportunity to see first hand the artistic creations of many cultures, from the beauty of the temples of India to the Louvre. These experiences nurtured her instinctive desire for creativity

Although she had been painting a number of years, she took an art workshop in 1995, which reconnected her with her passion for art. She decided at that point to commit her energy to becoming a still life artist.

Intrigued with the drama of light, Kathryn Miller works from life. Collecting objects from around the world, she sets up her still life in a studio with northern light, painting until she looses the natural light. By night, she designs her frames, using a 15th century technique called Graffito. She has studied with several well regarded painters such as David Leffell, Scott Christensen, Ernest Baber and Greg Koetz. As mentors and friends, they have encouraged her to pursue a successful professional career.

She became a member of Oil Painters of America since 1999. In 2001, the OPA awarded her Signature Member status. She has exhibited in four national OPA shows, receiving an Award of Excellence at the Palm Springs OPA show in April 2001 and the Friends of OPA Award of Excellence at the Chicago OPA show in May 2002. She also received an Honorable Mention in the Greenhouse Gallery International Salon Show in May 2003. Kathryn’s paintings were featured in Southwest Art Magazine’s “Artists to Watch” in April 2001.

Kathryn Miller’s work is about the passion she feels for painting. “Every time I sit down at the easel, I feel like I have come home. Creating a painting touches my true self. I am finally me. That someone would feel a connection to a painting that I created inspires me.”

Kathryn Miller’s paintings have been featured in galleries in California and the Southwest. She has just completed a 1,000 square foot studio that finally gives her the space to also pursue sculpting. 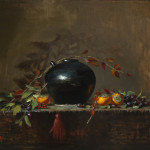 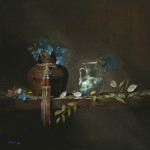 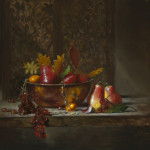 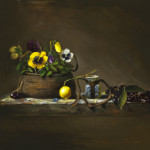 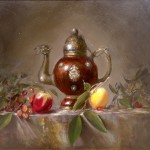 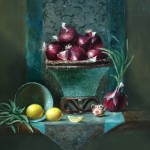