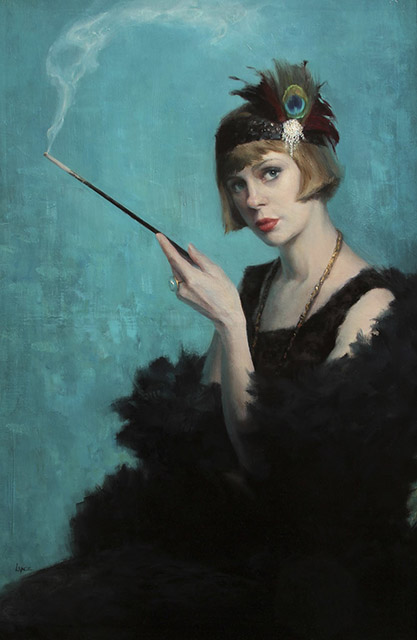 Leah Lopez grew up in the heart of Northern New Mexico where the influence of a rich culture of artisans fed her imagination and inspired the exploration of creative interests. Drawing and painting was a continual means of expression and inspiration, and in time led her to practice traditional techniques in Southern California then, later to the University of New Mexico. At 23, she was exposed to the timeless, enlightening philosophies encouraged by artists, Gregg Kreutz, Sherrie McGraw, and David Leffel. Over the next four years, studying with these artists eventually took her from the Southwest to the Art Students League in New York where she resides, today.

Leah’s artwork has made its way into the hearts and homes of collectors all over the country. She has been represented by fine galleries in Santa Fe, Edmond, Oklahoma City, Scottsdale, Carmel, Pasadena, Jackson Hole, and Bronxville and she participates in group shows in New York and across the states. She’s been honored with awards and accommodations, from esteemed organizations such as, Scottsdale Artists School, American Women Artists, Salon International, National Association of Women Artists, and Salmagundi Club.

Leah enjoys the privilege of mentoring and teaching. Regarding one of her favorite topics in class, she says, “We use our subject matter as the vehicle in which to explore what makes a painting visually appealing, interesting, realistic, or dramatic.” She teaches at the New York Academy of Art and is frequently invited to instruct at art institutions along the East Coast.