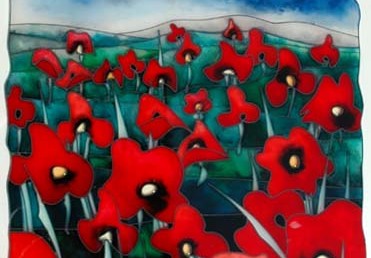 From Massimo Cruciani: “I live in Assisi, Umbria, and have been creating paintings on glass for 37 years, which are enjoyed by collectors all over the world. Spring is glorious in this part of Italy and my “Red Poppies” is a reflection of the abundance of nature and the promise of summer. My style is simple and figurative, easily accessible on an aesthetic level. My collectors often say it gives them a positive and refreshing feeling, like recalling a pleasant memory and experience. My vision is to add colour to a black and white world.”

Massimo Cruciani was born in Rome in 1946 to an Umbrian father, and it is in Umbria that his restless wanderings concluded many years later. At the age of twenty he was already a professional photographer. His talented determination to transform a black and white image in to a photographic painting, the fruit of countless hours spent in the darkroom, became an act of painting without brushes; a kind of personal experimentation that incorporated avant-garde techniques with a youthful imagination eager to embrace spaces beyond the ordinary.

During this formative phase in his artistic development, Massimo Cruciani worked as a set photographer at Cinec ittà in Rome (1967 and 1968) on the first and second series of the RAI television production, La Famiglia Benvenutí by A Gianetti. Following this he became a freelance photo-reporter, traveling the world; throughout Asia for a year (1969) and the USA (1970-71), where he worked in the photographic studio of Maurice Seymour in Chicago.

Whenever work became routine his spontaneity resurfaced and his inexhaustible taste for life would propel him once more in search of new experiences. He spent time in Mexico and Canada before returning to Rome in 1973 to work for the Master Photo Agency. Since 1974 Cruciani has worked in Umbria where paintbrushes have usurped the role of his camera. After an intensive apprenticeship in the studio of the painter G. Adami, he moved from oils to acrylics, to watercolors and then on painting on glass.

His misty toned colors, amorphous shapes, and the transparency of his medium, create continuous variations of light and shadows. His work charms all those who share his sense of freedom and an understanding of that “restless, soulful searching.”

Since his debut at the “Festival of the Two Worlds” in Spoleto in 1979, Cruciani has been refining his techniques and building on his passion for this art form. As a self-defined “craftsman of color,” he never tires of exploring in that realm where desire meets imagination, and there discovering those special moments when reality intermingles with fantasy.

He has participated in numerous individual and collective exhibitions and projects both in Italy and abroad. In the autumn of 1996, Romanian Padre Cojacaru Gheorglie entrusted him with the entire creative project for the windows of the new “Basilica Catolica” in Bacau, which was inaugurated in July 1997.

Pope John Paul II received Massimo Cruciani on October 15,1997, accepting his donation of a glass painting entitled “Francesco” for the Vatican Contemporary Art Museum. In April 2002, he published “The Long Road East” featuring a collection of black and white photographs and poems from his journey through Asia in 1969. Since 1981 he has lived and worked in Assisi, “Where it is possible to meet the world without leaving the studio.” 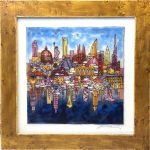 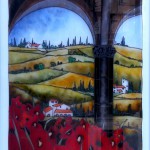 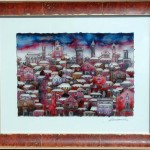 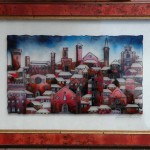