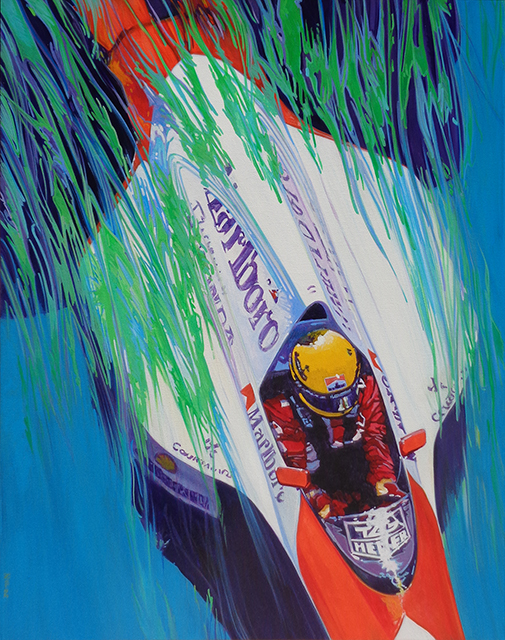 Niles Nakaoka reveals his passion for motor racing through his dynamic artwork. Self-taught, Niles’ unique style is instantly recognizable by his driver focus amidst a blur of colorful speed and motion.
It was around the time of the US Grand Prix in Phoenix in the late 80s that Niles became an automotive artist, inspired by the work of Hector Bergandi. He prefers Formula One cars because their open wheels impart a feeling of speed. He paints the driver–his favorite part–last of all. “It’s the most challenging, getting him positioned and his head tilted just the right way.”

Ironically, this Hawaiian Islands resident is thousands of miles from any race tracks. He tries to attend at least one major open-wheel race a year, but relies mostly on friends to supply him with photographs for subject matter. A surfer and snow skier, he sees parallels between his two favorite activities and racing cars: “It’s the trail of water that the board leaves, or snow the skis leave behind, that makes me think how a passing race car leaves behind that feeling of heat and smell of fuel.”

Returning home from his day job with Aloha Airlines, Niles works late into the night in his apartment studio. He works in a variety of media, favoring watercolors for their flexibility. “They’re kind of unpredictable, like me, and come out totally different from what I envisioned in the very beginning.”

A member of the Automotive Fine Arts Society, Niles is a recipient of their two most prestigious awards: the 2002 Peter Helck Award and the 1996 Athena Award of Excellence, presented at the annual Pebble Beach Show. In 2004 he again received an Award of Excellence and was featured artist at Car Art’s Automotive Art Expo at Coast Gallery Pebble Beach (shown in photo above with Speed Supreme)

Niles’ artwork has been featured in car enthusiast magazines like Road&Track, Racer, Championship Racing, Cavallino, the Russian magazine Autopilot, as well as the cover of Sports Car Market.