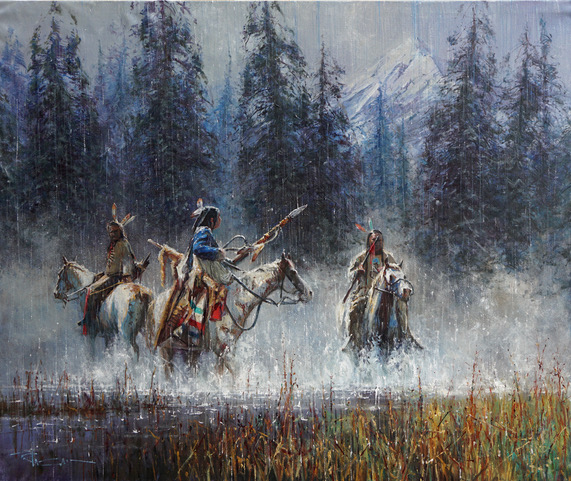 From artist Robert Hagan: I was born in Murwillumbah, NSW Australia and spent my youth between Brunswick Heads and Chillingham in and about the beautiful Tweed Valley. I attended Murwillumbah High School and excelled at nothing very much other than football and the final exams which got me a scholarship to University. 4 years later I graduated with an Arts degree in Economics and a Diploma in Education.

I married and divorced, taught high school at Wauchope High School and St Ives High School. I had my first exhibition at the Woolahara Galleries in 1974 and another at the Holdsworth Gallery with my two brothers. The shows were largely unsuccessful, but nevertheless encouraging.

I took a year away trying to paint and with little progress returned to the classroom. as Subject Master at St Pius X College for a year. Confronted with the choice of an offer of Subject Master at Sydney Boys Grammar and painting I again chose the later. I was now 28.

The next year I spent wandering and painting.During the teaching period I suffered burns and spent a year out, had a head on car accident in the Cahill Expressway tunnel, had the dubious pleasure of ‘helping’ put a stop to the practice of short selling, started painting and was guest on a few TV talk shows.

From then, to 31, I ‘taught’ myself to paint. It was the most frustrating period ever. I had no clue what I was doing and stubbornly sought no help whatsoever from anyone other than the deceased greats of the past.

My big breakthrough came on Freshwater Beach where I stood in anger after 3 years without progress and made the simple observation that learning starts with the 1st step and not the 50th! Nature is expressed in its simplest form at the seaside-sky, water and beach and, I worked out, just 3 colors are needed to replicate it! Just 3.

I sold my first painting as a ‘professional’ at a school charity art show. It was a beach scene with sky, water and sand with a fishing rod upright in the sand. I called it ‘Gone for A Werris’. It sold for $150. I had found the key. Then I found the kitchen pastry brush and that really powered my career.

I painted every sort of life and mood on the beach for about 2 years, especially pelicans. I bought a house in Harbord during that time and moved to Thailand and rented a cottage on the beach beside some coconut trees. I returned to Australia off and on but lived in the UK as well where I painted.My first book on Australia came out about this time. I was conned into taking a painting class in Sydney by 4 rather convincing women-Shirley Bliss, Joan Stanbury, Di Wallace and Valerie Taylor. I had many exhibitions from 1980 to 1988 and all were sellouts. Noella Byrne Gallery in North Sydney and the Sydney and Melbourne Hiltons were the best. By then I was painting just about everything.

I married again and my first son Joe was born in 1985. The next year I painted some scenes to hang in the office of the incoming Premier of NSW, Barrie Unsworth.The next year I threw my brush into the America’s Cup battle off Freemantle.

Then it was into thoroughbred horse racing and a chance filly, called Research, that went on to become the Horse of the Year in 1989. By then I was my own Father of the Year with my second son Graeme.

I moved to San Diego in 1991 to paint the America’s Cup battle and published my second book of Australian paintings. In 1995 I again painted the America’s Cup, won an international maritime painting competition, had established a presence in select US galleries and was about to publish 2 more books. I gave seminars on painting, was invited to judge art competitions in Los Angeles and continued with exhibitions. My paintings now included the Wild West genre. On days when not painting I fished in Mexico, lost golf balls and enjoyed the ‘Thank God It’s Friday’ ritual at the pub.

My book of paintings and prose celebrating women and children, ‘Cherished Moments’ was published and I returned to Australia in 1998 with my children.I met with an old buddy from Channel 9 and floated the idea of TV show about painting and let it sit in the back of my head while I went off to Thailand to build a hotel. I published another book and returned to USA.

In 2002 I bought a video camera to film my boys play rugby. The guy I bought it from showed me how it works so well that I asked him to film me do something with paint the next day. He did this, cut it and the edit I showed my mate from Ch 9 who thought it had ‘some promise’. So off I went fiddling with ideas, working with cameramen, editors, writers, entering film festivals and ferreting around Hollywood.

In 2009 that promise ended up in a a series of 30 minute episodes, called “Splash of Color’ on Discovery HD which proves that if you stick to something long enough and surround yourself with good people anything can happen. 2010 is best forgotten when it comes to prospering as an artist as we ‘lot’ were the first to fall into the economic chasm and no doubt will be the last to climb out. During this time I decided to make a few more TV shows but this time for the artist rather than the traveler. The result was 3 episodes for a series called “Lets Go Painting’ which PBS in USA is flapping its wings over. Thats a wait and see situation as these things take time. In the meantime and while the bankers of the world go back to elementary school, I’ve decided 2011 will be the year of ‘The Passionate Artist’ TV show, 3-4 new instructional DVD releases and some really great paintings.As for my 2 sons, well they seem to most certainly have inherited a good portion of my genes judging by their recent successes in the creative world. 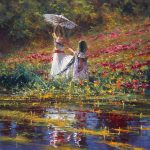 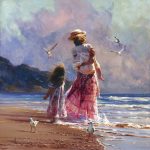 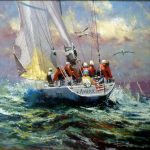 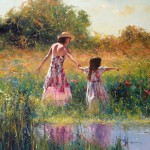