Moesle was born in 1932 in San Jose, CA. He received a B.A. in Art at San Jose State College and also studied three years at the Ruskin School of Art, Oxford University, England.

To view a painting by Robert Moesle is to be drawn into a world of fond memories. For the would-be tourist, the inveterate traveler and the sometime expatriate alike, he offers a view of his adopted European home to which each may respond according to his own special experiences.

Moesle accomplishes his magic through his choice of subject matter and his method of structuring his paintings. Both subject and composition work together to create an atmosphere which expresses Moesle’s love for the European scene and which inevitably draws the viewer in. He’s a consummate composer and an accomplished draftsman. There’s a certain rightness to his work which serves to hold the viewer’s attention and confirm his feeling that Moesle’s presentation reflects that world as it truly is. Many of his paintings are constructed around strong horizontals and verticals which divide the picture plane into well-defined and easily graspable areas and which give an air of stability and inevitability to the whole.

Over his lengthy career, he’s had many museum shows – here and abroad. He’s been singled out in features in important art publications and has been listed in Who’s Who. He’s had close to 50 exhibits in prestigious venues across and country and in Europe.  And his list of private and corporate collectors is impressive. 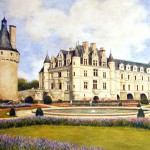 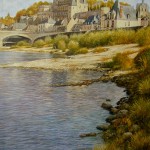 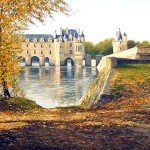 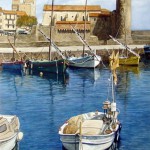 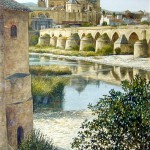 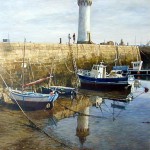