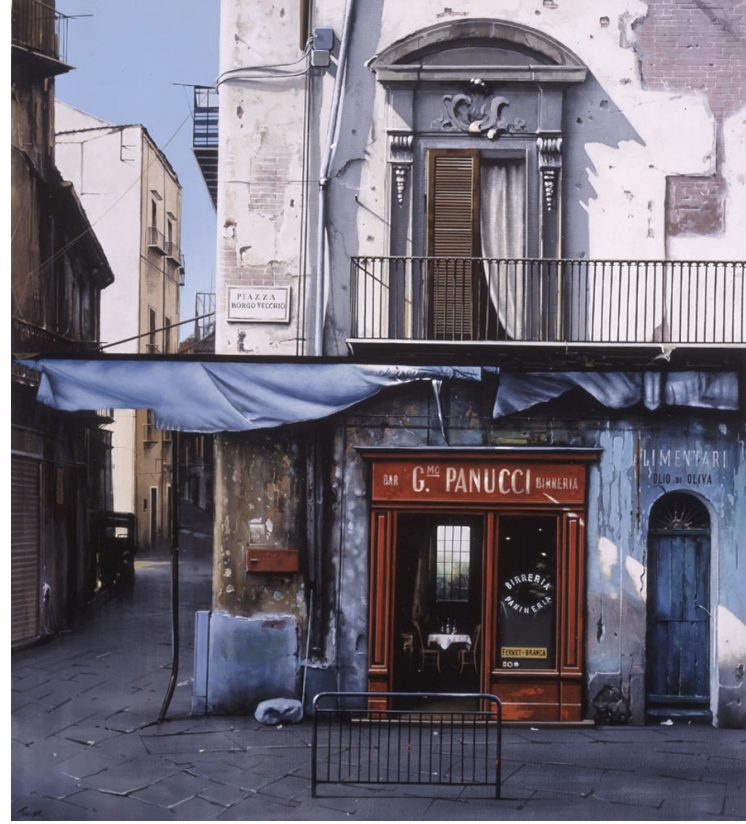 Born in Lodz, Poland in 1951, he went on to study at Lycee Francaise in Warsaw training for several years in fine art but ultimately receiving a master’s in sociology and economics. In 1977 he moved to the long-time hub of artistic renaissance and inspiration, Paris, France with his wife Joanna. It was here that he fine-tooled his signature style.

Fusing a realistic technique with romantic subject matter, Pradzynski brought the longing for past remembrances and the immediacy of living in the moment intimately together. He has said that his paintings are an attempt to romanticize the empty streets and the traces of the past and to preserve places that are slowly disappearing. Pradzynski’s work explores the streets of Paris like a solitary lover whom every window, doorway, and cafe is filled with meaning. Much of Pradzynski’s mood is created upon the stage of old Parisian buildings and storefronts. The actors become a window, two chairs, or a doorway whose interplay with light and shadow perform for the audience of our memories and dreams.

Pradzynski has been represented in numerous galleries for over 25 years in the United States, Japan and Canada where his talent was showcased in countless exhibitions. Most recently he completed two international book-signing tours to promote his work. His paintings have made their way into diverse personal collections ranging from the likes of: actor Denzel Washington, writer Jackie Collins, golfer David Ducall and former Secretary of Defense Casper Weinberger. Pradzynski’s work also graces the corporate collections of Toyota and Bristol Meyers and is in the permanent collection of the Polish Museum of America.

Apart from his illustrious career, he will be most remembered for his warm smile and kind heart. We lost a Renaissance man whose presence certainly filled whatever room he was in; his demeanor always alluded to the great artistic luminary that he was. He never complained and was genuinely grateful for all he had, the admiration from his collectors and the love of his devoted wife. He and his wife, Joanna, moved to Paris in 1977, where he became known for his realistic Parisian street scenes. At the time of his death, he lived in Montmartre. He was murdered in December 2007 in a road rage incident while he was walking with his wife in Paris.